7 Ways to Teach Your Children Grit 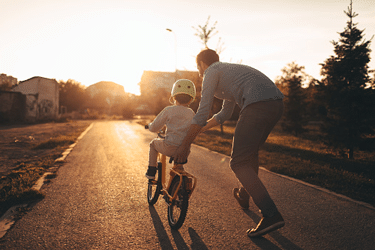 Teaching grit has been around for many years, just under different names, such as persistence, resilience, stick-to-itiveness, and others. However, during the last couple years, grit has become one of the hottest buzzwords in education and parenting.

On this page, you’ll learn where grit comes from, how to teach grit to your kids, and how it can help them succeed as adults.

In its simplest terms, the meaning of grit is the ability to see a task through to completion. It’s defined as a person’s “perseverance and passion for long-term goals”, such as the ability to avoid distractions, maintain one’s focus, and overcome setbacks.

Recent studies suggest that this perseverance can be a determining factor in your child’s long-term success and happiness.

Understanding grit and how to teach it to your kids can be challenging because it focuses on allowing them to struggle, fail, and try again. This goes against your instinct as a parent, which is to help your child when they’re having difficulty.

But the steps below show that teaching grit doesn’t have to mean standing back and watching your child fail. Instead, grit is about understanding the entire process of learning, from grasping the topic, struggling with it, and finally succeeding.

What Is the Grit Scale?

The Grit Scale was developed by Angela Duckworth, a 2013 MacArthur Fellow and Christopher H. Browne, a Distinguished Professor of Psychology at the University of Pennsylvania, in order to reveal a person’s stick-to-itiveness.

This questionnaire is easy to use as a prompt for self-reflection and shows your Grit Score on a scale of 1 to 5. The higher the score, the more grit you have. The test also reveals the percentage of American adults you score higher than.

The short quiz is not intended as a scientific guide for research because there are limitations to the results—the biggest of which is the fact that people hold different standards by which they judge behavior.

However, it is a quick and easy way of seeing how gritty you are, where you can improve, and how you judge yourself.

What Are Non-Cognitive Skills

Non-cognitive skills are also referred to as “soft skills” or character strengths. These skills are associated with an individual’s personality, temperament, and attitude.

Some examples of non-cognitive skills are:

Research suggests that this may be because low-income children have more stress in their lives. They may also have to overcome greater challenges, both inside the classroom and outside of it, than their middle class and wealthier peers.

Teaching Grit to your kids: A Step-by-Step Guide

Whether you’re a low-income family or not, teaching grit to your children can help them develop the fortitude to help them succeed as adults.

Rarely, even as adults, do new projects come easily. To achieve goals, you have to overcome obstacles, learn from mistakes, and continue past struggles.

Instilling that work ethic in your children can be difficult, as many of the steps below show. But having your children understand that struggling is part of the learning process can lead to greater happiness in their adult lives.

Even though we struggle with new activities as adults, our kids don’t always see that struggle. To them, we’re superheroes.

And, while it’s great to be a superhero, letting your kids see you struggle every now and then can be beneficial because it allows them to observe how you overcome those obstacles.

One example of teaching grittiness could be if you signed up for a half-marathon. First, you could create a training schedule to show your kids how you broke the big hurdle into smaller, more accomplishable goals.

Then, have your kids come to the race so they can see that, even with all of your hard work, finishing wasn’t easy. Showing your children that even you, their superhero, struggle at new things, shows them first-hand that, while difficult, achieving goals can be rewarding.

#2: Allow your child to get frustrated

One of the hardest tasks as a parent is to watch your kid become frustrated trying something new. Naturally, you want to help them. But, keep in mind that children learn from the struggle.

Even if they end up failing at that particular task, the process of struggling and seeing progress can help them in the future, especially when reinforced.

It’s easy to offer praise for the end result, such as a good grade, a good performance during the school play, or scoring a goal on the soccer field. But teaching grit includes praising the effort behind those good performances.

In any of the cases mentioned above, your child did well because of the time and effort they put into learning and practicing. So, while the end result was good, don’t forget to praise this effort because, though every performance may not be perfect, consistent effort will lead to more good performances than bad.

#4: Remember that perfection is not the goal

While your child performs a new activity, you can see in advance if they’ll succeed or fail. But, the goal shouldn’t be straight As or advanced classes. Instead, the goal should be to instill in your children the traits that will lead to success as an adult.

If your child only does things they know they’re good at, or stops halfway through something once it gets hard, they’re not challenging themselves to develop these non-cognitive skills.

And, sometimes simply completing a task is better than having a perfect outcome, so that they can learn the value of the process and how to improve for themselves.

#5: Let your child tackle tasks on his or her own

Constantly intervening in your child’s activities prevents them from learning for themselves. This can undermine their confidence and create a fear of failure. They may even end up relying on you or waiting for you to help with future struggles.

Instead, demonstrate how to do a new task, such as cooking, and allow your child to try. This allows them to try new things, but without feeling that they are all alone. Plus, if they need your help, you’re right there to jump in.

This has the added effect of teaching your child that you’re always available if they need you, whether for cooking or for more serious problems. During their teenage years, this foundation can be especially helpful.

Choosing when to jump in and help when you see your child’s failure in advance is always a difficult decision. One of the best ways that you can teach your child grit is, whenever possible, ask them to do tasks that they are capable of and age-appropriate, but that won’t come easily.

However, you shouldn’t stand by and simply let them fail either, because they may construe that as you don’t love them.

Instead, help your child at each step, without actually completing the task for them. This helps them learn the process and feel the pride of completing something new, all while knowing that you’ll be there to help them.

At times, it’s our instinct to quit when a task gets difficult. When you see your child struggling, offer encouragement that you’re there to help, but you know that they can do it on their own.

For instance, if your child plays the piano and has a big recital coming up, but keeps stumbling on one section of the song, offer encouragement and guidance. You can remind them that even if they make a mistake at that part, to take a deep breath and finish the song as well as possible.

Don’t Worry About Being a Nudge

No matter what task your child wants to achieve, whether a musical instrument, dance, athletic, or anything else, they need to learn the process before they can succeed. That means setting aside time to practice.

But, like all of us, kids face plenty of distractions. One example of grit is learning how to delay immediate gratification in order to achieve a greater satisfaction later on by seeing tasks and projects through to completion.

That means, come practice time, you’ll have to be the nudge. Though no one wants to be that parent, nudging can show your child how much importance you put on their success.

And, while the initial whining and complaining may never completely stop, if you remain consistent, the complaints should decrease over time.

Does Your Child’s School Teach Grit?

Many schools and districts are trying innovative approaches to creating a culture that focuses on developing non-cognitive skills. Ask your child’s teachers if they are incorporating some of these strategies into the classroom, if there is a bigger movement inside the school or district to do so, and how these measures are tracked for success.

Some of these whole-school, integrated approaches to develop non-cognitive skills, such as grit, in some schools include:

Check to see if you child’s school participates in any of these techniques teaching grit and other non-cognitive skills and if they’ve found success.

Applying Grit to Your Studies

As grit continues to influence child psychology, you may want to be a part of helping parents, schools, and children establish a foundation of grittiness for future success, such as those in psychology or education, like Angela Duckworth and other researchers.

There are many ways to continue your education and influence the field or to teach the values of grit to your kids and others.

For instance, earning an educational school psychology graduate degree, which includes school counseling and school psychology, may prepare you for a career directly helping students of all ages to overcome obstacles inside and outside of the classroom.

Other degree options include a master’s degree in psychology or a PhD in psychology. Normally, these degrees have concentrations that focus your degree on a specific aspect of the field.

Either way, earning a graduate degree in education or psychology can help you teach kids, including your own, the value of grit.