From Guidance Counselor to School Counselor

The History and Transformation of School Counseling

The history of school counselor jobs begins in 1909 when the Boston Vocational Bureau and Boston Public Schools partnered to implement a vocational guidance program within the school system. This model quickly spread in popularity and within a decade the movement had gained international influence. In subsequent decades the role of counselors has evolved to become an integral part of most educational systems. 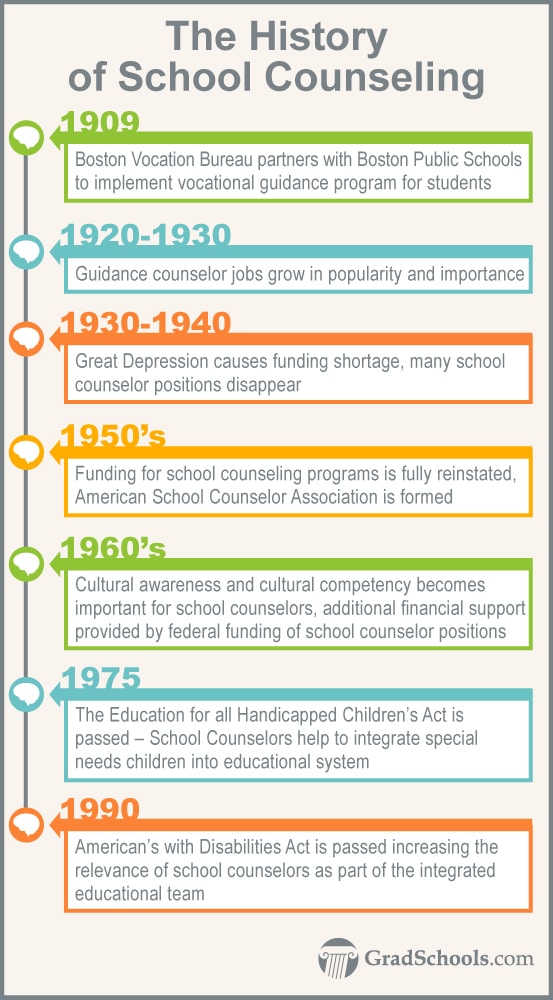 In the 1920s and early 1930s the importance of school counselors within the educational system became more pronounced. Guidance counselor jobs were viewed as a critical element in a schools ability to promote the emotional and moral development of the student population. During these years, guidance counselor jobs became widespread throughout the nation.

During the Great Depression the limited availability of resources to support public programs resulted in a decrease in the number of school counselors employed in the educational system, and the profession didn’t begin to recover until 1938.

Funding for educational initiatives, including school guidance counselors, was fully reinstated in the 1950s, and during the same decade, the American School Counselor Association was formed.

In the 1960’s awareness of the importance of cultural competence was at the forefront of school counseling practice. Support from federal funds helped to increase of the number of school counseling programs throughout the nation. During this time there was also an influx of new counseling theories that applied specifically to the practice of school guidance counselor position.

By the 1970’s guidance counselor positions began to be viewed as an integrated part of the educational process. Counselors became part of multifunctional educational teams comprised of students, parents, administrators and teachers. This shift was further solidified when the Education for all Handicapped Children Act was passed in 1975. Addressing the special needs of children with emotional, mental and physical disabilities presented school counselors with the opportunity to use their specialized skills to help these students thrive within the school system.

As standards-based educational initiatives began to trend in the 1980s, the effectiveness of “guidance counselors” was questioned. As a result of the Americans with Disabilities act of 1990, the guidance counselor job description also grew to include increased collaboration with special education teachers, and increased responsibilities related to advocacy for students with disabilities.

The school counseling profession created professional standards and competencies in the late 1990s, with a focus on prevention and intervention efforts to close achievement and opportunity gaps.

Guidance Counselor Salary – Then vs. Now

Initially, “vocational guidance counselors” focused on job and career, but over time the position expanded in nature to include coaching and counseling around emotional and psychological concerns. Also, during these early years, the vocational guidance counselor position was often a teacher who was given added responsibilities in the form of this position, without a pay increase! Thus, the original guidance counselor salary was $0. There has been significant salary growth since the early years of school counselors, in according to the Bureau of Labor Statistics; the 2012 median annual salary of school counselors was $53,610i.