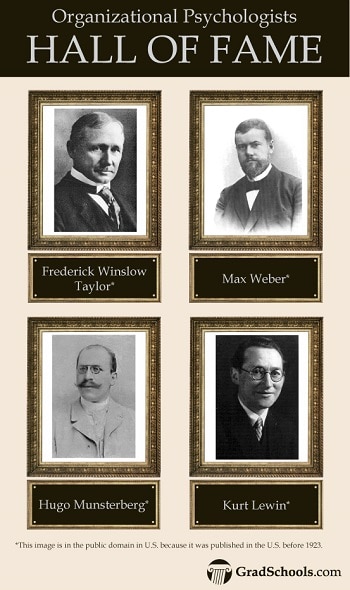 Frederick Winslow Taylor (1856-1915) – Taylor was an American mechanical engineer who focused on improving industrial efficiency. He is considered by many to be the father of scientific management. He gained hands-on management experience at a steel works and studied the productivity of both his employees and their machines. He emphasized using scientifically sound principles in the workplace, rather than haphazard approaches, and advocated for significant training of employees rather than leaving them to “figure it out on their own”.

Max Weber (1864-1920) – Weber was a German sociologist, philosopher, and political economist. Influential in many fields and considered one of the founding fathers of sociology, he pioneered the scientific study of organizational structure. He promoted bureaucracy as the most rational form of organization.

Hugo Munsterberg (1863-1916) – Munsterberg was a German psychologist focusing on applied psychology, and founder of the field of forensic psychology. His works Vocation and Learning and Psychology and Industrial Efficiency are considered some of the earliest books dealing with industrial psychology. Some of the topics upon which he focused included how to find the right candidate for the job, how to maximize work output, and how to create effective vocational guidance early on, so that one can identify at a young age the work to which one is suited.

Walter Dill Scott (1869-1955) – One of the first applied psychologists, Scott focused on the application of psychological principles to business. He published two books on the psychology of advertising, and assisted in military personnel selection during WWI.

Kurt Lewin (1890-1947) – Lewin was a German-American psychologist who contributed to the fields of social, organizational, and applied psychology. His focus was group dynamics and organizational development, particularly sensitivity training.

Morris Viteles (1898-1996) – This Russian psychologist contributed to the field of vocational guidance and workplace psychology and morale. He published several books and consulted for the Army, Navy, and Air Force.

John C. Flanagan (1906-1996) – This American psychologist developed the Critical Incident Technique, which identifies and classifies human behaviors associated with the success or failure of a particular activity. During WWI, Flanagan worked for the Aviation Psychology Program, using tests and assessments to determine who should fly planes for the military.