Popularized on T.V. in shows such as Criminal Minds and Mindhunter, criminal profiling uses behavior analysis and crime scene investigation to develop profiles on suspects.

Though there are many supporters, some critics claim it may narrow investigations without concrete evidence to support claims. Learn about the successes and shortcomings of criminal profiling and how forensic psychology continues to grow. 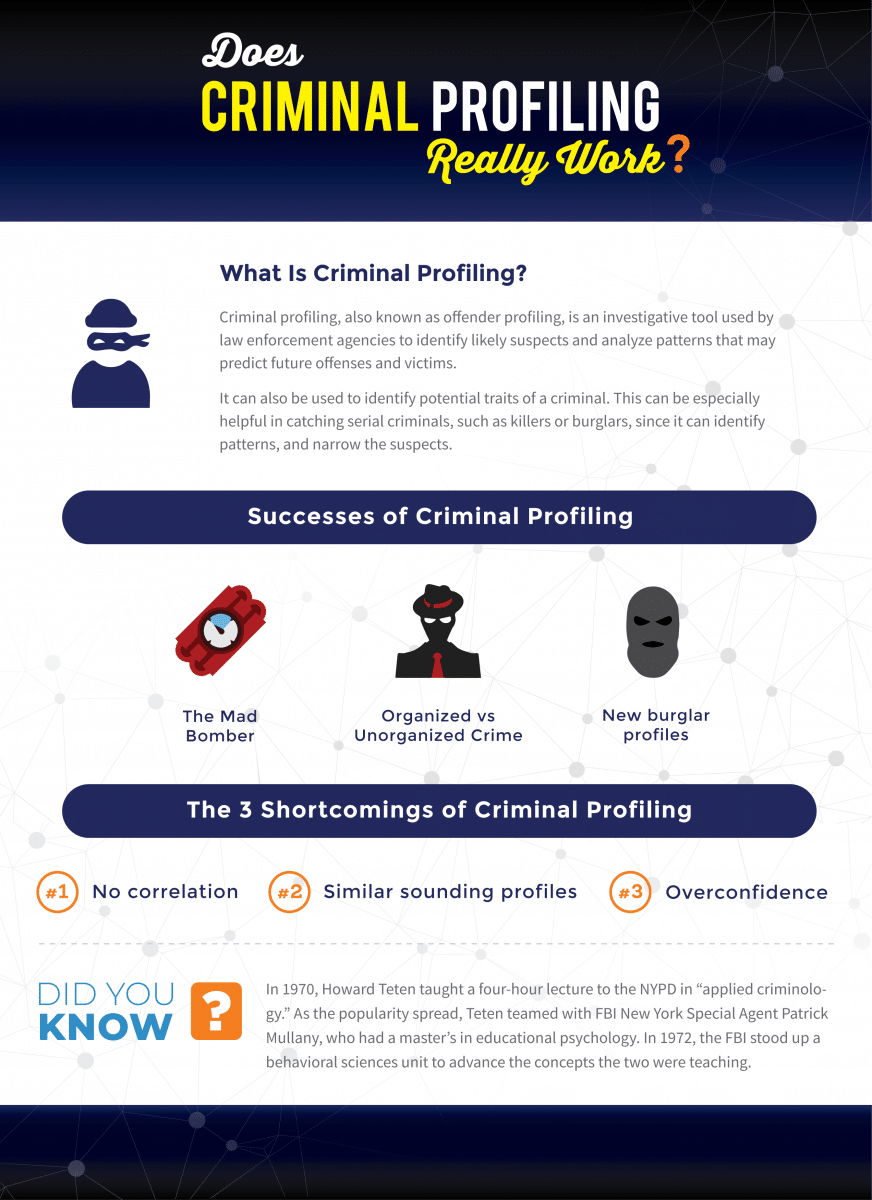 What Is Criminal Profiling

Criminal profiling, also known as offender profiling, is an investigative tool used by law enforcement agencies to identify likely suspects and analyze patterns that may predict future offenses and victims.

It can also be used to identify potential traits of a criminal. This can be especially helpful in catching serial criminals, such as killers or burglars, since it can identify patterns, and narrow the suspects.

The Behavioral Analysis Unit (BAU) is a department of the United States Federal Bureau of Investigation’s National Center for the Analysis of Violent Crime and uses behavioral sciences to assist criminal investigations.

How Does Criminal Profiling Work?

Criminal profiling helps catch criminals by analyzing crime scenes to gather information about the criminal’s behavior. The more clues left at a crime scene, or the more behavior available to analyze, the better the profile will be.

Though forensic psychology and criminal profiling may not be a science, there are definitely scientific elements to it. These techniques have helped law enforcement narrow their search and helped them find suspects.

However, it’s important to remember that profiling won’t catch a criminal by itself.

Instead, forensic science works in conjunction with good police work to catch criminals.

As a field, criminal profiling isn’t that old, though it has been around since at least the time of Jack the Ripper.

While their analysis didn’t lead to the capture of Jack the Ripper, they did clear some of law enforcement’s assumptions. One of these was the fact that he was a doctor or physician because of the fact that he took organs from some of his patients.

Dr. Bond claimed that Jack the Ripper was more than likely not a physician, or even a butcher, because his cuts were rudimentary and didn’t show any training that either of these professionals would have.

As the field has developed since then, these types of analysis have directly led to the capture of some criminals.

Between the years of 1940 and 1956, the “mad bomber” George Metesky, planted more than 30 bombs throughout New York City in movie theaters, phone booths, and other public areas.

Brussel came up with a detailed description: unmarried, foreign, self-educated, in his 50s, living in Connecticut, paranoid, and with a vendetta against Con Edison, where one of the first bombs had been planted.

The profile was dead on and led to Metesky, who was arrested in January of 1957 and immediately confessed.

Behavioral analysis breaks crime scenes into organized and disorganized, though some crime scenes present elements of both.

Usually, organized suspects are male, 30-50 years old and typically a repeat offender. He’s normally employed full-time, with an above average IQ, and with at least adequate social skills. He plans and prepares and normally cleans up as much as possible to remove as much physical evidence as possible.

On the other hand, a disorganized criminal is usually a younger male, with a lower than average IQ, and usually socially inadequate. He may have a substance abuse problem or drug addiction, operates spontaneously, and leaves incriminating evidence behind.

This distinction has helped criminal profilers narrow down the traits of suspects based on how the crime scene was left. Though it’s not 100% accurate because of the inconsistency of human behavior, any way to narrow the pool of suspects can help lead to catching an offender.

After adopting a new profiling system for burglars created by Bryanna Fox PhD, assistant professor of criminology at the University of South Florida, law enforcement agencies are solving an average of 85% more burglaries.

Building upon the organized and disorganized profiles, Fox added interpersonal and opportunistic, each of which has a corresponding likely personality.

The 3 Shortcomings of Criminal Profiling

Over the years, there has been plenty of criticism that criminal profiling doesn’t help catch criminals, and, in fact, can actually lead police and investigators in the wrong direction.

While forensic psychology isn’t perfect, it has helped more than it has hurt. No field, especially those dealing with human behavior, is ever going to be completely accurate.

Some of the criticisms of criminal profiling are listed below.

One of the biggest criticisms of criminal profiling is the fact that it assumes there’s going to be some correlation between your day-to-day personality and what you do at a crime scene.

Researchers at the University of Liverpool reviewed 100 cases involving stranger rapists. There findings showed no correlation between criminals and no assumption of a homology between crime scene actions and background characteristics.

If there’s no correlation between these actions, then forensic psychologists may have a difficult time creating profiles for suspects, at least for certain types of crime.

Similar to the fact that at least for some crimes there is a lack of correlation, some critics claim that criminal profilers are still basing their judgements off of FBI interviews with serial killers in the 1970s.

As a result, sometimes profiles can be too focused, as was the case with the Washington D.C. snipers. Profilers announced the murderer was probably an employed but disgruntled white man in his 20s or 30s, likely in a white van.

However, when the so-called “Beltway Snipers” were arrested, they turned out to be unemployed black men, aged 17 and 40. And, though police had noticed their blue sedan near several shooting locations, they didn’t close the loop because of the profile offered.

One of the problems facing criminal profilers is overly specific claims and overconfidence. As mentioned with the “Beltway Snipers”, this tunnel vision can lead the police down the wrong path and take them longer to find the true suspects.

Another example of a mistake was the Green River Killer, who eventually pleaded guilty to 48 counts of first-degree murder. Originally, investigators dismissed a letter from the murderer as fake because it didn’t fit the profile though it later turned out to be real.

Though criminal profiling has helped in a number of cases, forensic psychologists need to be flexible in their profiles and be willing to consider other options if evidence shifts the facts.

In 1970, Howard Teten taught a four-hour lecture to the NYPD in “applied criminology.” As the popularity spread, Teten teamed with FBI New York Special Agent Patrick Mullany, who had a master’s in educational psychology. In 1972, the FBI stood up a behavioral sciences unit to advance the concepts the two were teaching.

Even with all of these shortcomings, there’s no question that criminal profiling is valuable to investigators. However, it should be used as any other investigative tool that can generate leads and cast a wide, but targeted net.

And, profilers need to be able to back up their statements with concrete evidence.

The best profiles take these into account and try not to overreach. Instead, the goal should be to narrow down a field of potential suspects and should never be used to finger a specific individual.

As stated in the burglar profiles created by Bryanna Fox PhD, and the success it has led to in various police departments, forensic psychologists and law enforcement officials continue to work together to come up with new methods of catching criminals.

These profiles will never be 100% accurate, as it’s impossible to always predict human behavior. However, as we continue to map the human mind and learn more about behavior as a whole, we’ll be able to refine practices to help officials even more.

One benefit that profilers offer that many critics overlook is the help given to investigators during interrogation. With a clear profile of a suspect, including potential mental illnesses, drug addictions, or other psychological issues, investigators may have a better understanding of what to ask and what issues to focus on.

These interviewing tips alone can lead to confessions and information that may otherwise not have been brought forth.

If you’re interested in becoming a criminal profiler, earning a forensic psychology graduate degree can teach you the skills and knowledge through courses such as criminal psychology, psychological profiling, and courtroom and legal issues.

But, there are many types of options when it comes to graduate degrees in psychology and you may find that you’re more interested in developmental or even educational psychology.

Click on any of the sponsored listings on this page or on the button below to get matched to the perfect graduate program for you!